Former President Goodluck Jonathan has applauded the standard bearer of the Labour Party, Peter Obi, who he said was the first presidential candidate to lead a delegation to visit him.

The courtesy visit to Jonathan’s home in Yenagoa took place before Obi’s rally in Bayelsa State on Friday, December 23.

Jonathan speaks on Obi’s visit, tasks him ahead of the 2023 election 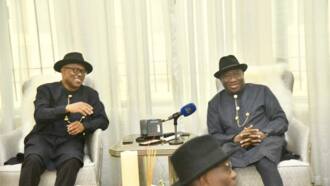 While commending Obi for his cultured public utterances, the ex-president urged him to make the unity of Nigeria his priority if elected as president, The Punch reported.

“I want to thank you that you are the first presidential candidate to pay a courtesy visit to me. I want to use this opportunity to encourage you in what you are doing.

“I have been listening to comments from political leadership and sometimes our supporters do more damage on our behalf. And I must commend you because your utterances so far have not shown any division. Just keep doing what is right.

“If you win, you will be a president for the whole nation, you won’t be a President for any group of people.” Peter Obi finally speaks about his ‘hobby’ as a leader, plans to use it to better Nigeria

Appreciating his warm gesture and hospitality, an excited Obi promised to do his best to unite the people.

Obi also vowed to bring back the glory days of the country when he gets elected as president at the February 25 presidential poll.

Doyin Okupe sends letter to Peter Obi, tells LP candidate what to do after resigning

He announced his resignation in a letter he addressed to the LP presidential candidate, Obi.

In the letter which he posted on his Twitter page, Okupe said it is better not to allow his personal interest to distract the campaign of Obi and that of the party, hence his decision to resign.

Meanwhile, Bola Tinubu, on Tuesday, August 20, had a closed-door meeting with former president Goodluck Jonathan in his consultation efforts ahead of the 2023 general elections. 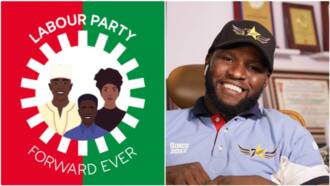 Doyin Okupe: Nothing can stop us now, Labour Party Leader Reveals Next Move

Although details of the meeting were not known to the public, a source in Tinubu’s camp said the meeting was part of his consultation efforts with major stakeholders in the polity as the presidential elections get closer.

The source also revealed that the ex-president was happy to see Tinubu and the APC leaders.

Those who joined the presidential candidate of the APC included his running mate, Kashim Shettima, governor Dapo Abiodun of Ogun state; Bello Matawalle of Zamfara, and Abubakar Badaru of Jigawa state.