The Presidential Campaign Council (PCC) of the ruling All Progressives Congress (APC) has said that attempts by the opposition Peoples Democratic Party (PDP) and its flag bearer, Atiku Abubakar to de-market the achievements of the governing party will not work as Nigerians won’t give in to their lies.

The council also said that all surreptitious moves by the opposition to rewrite their ugly past that has plundered the country into the abyss of suffering will hit the rocks. These positions were contained in a statement by the Director, Media and Publicity of the campaign council, Bayo Onanuga in Abuja on Saturday.

APC-PCC noted that recent slanderous utterances by the leaders of the opposition PDP and its presidential candidate against the ruling APC and President Muhammadu Buhari were not only insulting but an abuse of the collective intelligence of Nigerians.

Taking a swipe at PDP, the campaign council maintained that Nigerians have not forgotten the atrocious era of the opposition party, adding nobody would now accept all the lies being peddled by the PDP leaders in desperation for cheap votes ahead of next year’s elections.

The ruling party reminded the opposition of its failed attempt to change its name due to its atrocious record, by mounting podiums and trying to deodorise and beautify the party’s ugly era. Atiku blasts Buhari’s government over traderMoni, others, reveals what he will do

According to the council, “Leaders of Peoples Democratic Party and its presidential candidate, Alhaji Atiku Abubakar are playing on our seeming forgetfulness and insulting our collective intelligence.

“Having consistently shown a lack of capacity for introspection, PDP Leaders have been going about the country slandering the All Progressives Congress-led government of President Muhammadu Buhari, believing that as Nigerians we have forgotten their atrocious era and that we are unappreciative ignoramuses.

“Notably Atiku Abubakar, the presidential candidate of the party that once contemplated changing its brand name because of its atrocious record, has been emboldened by our assumed forgetfulness as a nation, mounting podiums and trying to deodorise and beautify the party’s ugly era.”

Recalling the series of blame games by the opposition, the ruling party campaign council cited Atiku blaming the APC for the emergence of Boko Haram, forgetting that the insurgents emerged in 2009 under his party’s watch. “He (Atiku) blamed Buhari over the economic challenges, forgetting that he opportunistically joined the coalition that toppled the clueless PDP government of President Jonathan when the economy was nose-diving.

“Atiku has now been joined by Abubakar Saraki, the failed Senate President and saboteur-in-chief of the Buhari agenda, who in his latest comment in Ilorin, urged Nigerians to “go back to the PDP at both the State and the national levels”. In the famous words of Dino Melaye, we say “PDP: God forbid ”.

Pushing his party’s propaganda to an insane level, Saraki said: “From my trip round the country, I discovered that Nigerians are tired of the ruling APC government because they are overwhelmed with hardships,” he said.

The ruling party argued that in a sane society, PDP should not be canvassing for votes to be returned to office, when during their 16 years in power, they laid the foundation for the challenges we face today. 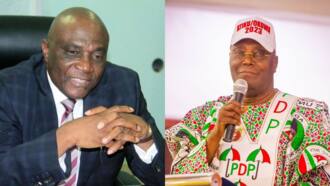 Meanwhile, Atiku Abubakar has promised business and trade will pick up again if he is elected as the next president of Nigeria.

The former vice president stated this at the PDP presidential campaign rally, which witnessed significant party supporters at the Dan Anyiam stadium in Owerri, Imo state.

On insecurity, the PDP presidential candidate noted that if elected, he would sit and dialogue with aggrieved individuals to resolve the insecurity problem in the state.

He stated this on Monday, October 10, during the official kick-off of the PDP presidential campaign in Uyo, Akwa Ibom state, and said if elected he would fix Nigeria’s education sector.

He said the protracted strike by the Academic Staff Union of Universities and poor condition of the nation’s universities and welfare of university teachers will be addressed headlong.