Popular Nigerian actor Bimbo Manuel has recounted an experience from the past that almost left him in a wheelchair.

According to the actor during a podcast with Chude, he was involved in a car crash which affected his spine some years ago but didn’t feel any pain until some days later. 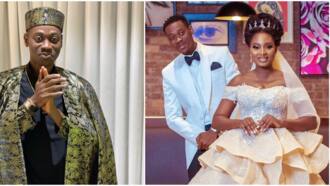 “I’d rather get killed than marry an actress”: Lateef Adedimeji recounts his old vows before meeting Mo Bimpe

“I’ve been told three times to go and get a wheelchair and that was by experts, people who should know. They told me, Mr Manuel, do you know anyone abroad? Maybe they can get you the electric type so you’ll be able to use it myself but I said no.”

The actor said at some point he went to a general hospital on Lagos Island where he met a doctor at the orthopaedic section.

“I was in my late twenties, early thirties and a doctor put me on treatment for rheumatism and arthritis until I couldn’t walk anymore. I lost all sensation on my right side, and I was frustrated. I just couldn’t go anywhere, the slightest movement would make me scream.” 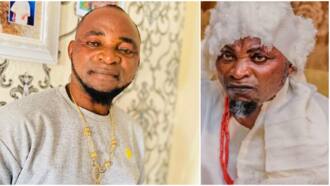 Actor Adewale Alebiosu opens up on how reciting incantations in movie adversely affected his life, many react

He, however, revealed he was later taken to the Obafemi Awolowo University Teaching Hospital in Ile-Ife where he was able to walk again in a couple of months.

Bimbo Manual on why he married late

The actor who didn’t get married until he was 40 said he didn’t plan to marry because he had been so independent for a long time.

According to him, he didn’t get what marriage was all about and didn’t want to belong just because everyone was married.

Alebiosu shares how reciting incantations in movies affected his life

Meanwhile, Yoruba actor Adewale Alebiosu in a report via Legit.ng opened up on how reciting incantations in movies affected him in reality.

Adewale Alebiosu in an interview with BBC Yoruba revealed that some of the incantations he recites in movies had adverse effects on him in real life.

He added that he never knew the incantations he was reciting could come to haunt him in real life as he advised upcoming actors to be prayerful.