Cardi B has once again demonstrated that she is too real to care about her celebrity image. On Twitter, the American rapper posted a no-makeup selfie.

The superstar couldn’t help but get online people’s thoughts on her beauty. In the caption of the photo, the stunner asked her fans whether she looks better with or without makeup.

The two photos Cardi posted on Twitter were side by side, with one showing her face full of makeup and the other showing her makeup-free face. 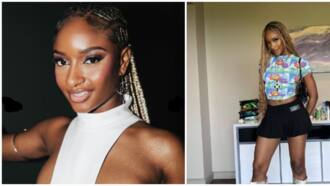 “Sabi girl no dey too like cloth”: Reactions as Ayra Star talks about her mini skirts

In the bare-faced snaps, Cardi looked natural as if one could run into her while rushing to a nearby store or as a familiar neighbour in a doek in the morning.

Just as the caption prompted people to comment, online users were quick to express their thoughts.

Netizens shared mixed emotions, with some praising Cardi for her natural beauty and others mocking her. Internet users commented:

“Your husband is still cheating regardless so it doesn’t matter.”

“Either way you look pretty❤️”

“hella fine without makeup, that shouldn’t even be a question.”

“It doesn’t matter which one because you still got surgery” 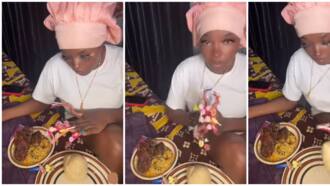 “Both clearly but without makeup your skin is eating momma.”

“You’re beautiful regardless! With or without “

“Cardi either way you look botched and a hot mess, you will never hold as much beauty as Nicki Minaj.”

“They said you were ugly with no makeup they clearly lied “

“Definitely with and please don’t ever post that again.”

Canadian-born Ghanaian actress, Jackie Appiah, has given her nine million followers on Instagram a glimpse of her skincare beauty routine.

The A-lister actress has shared a video featuring her favourite skincare products and how to use them in a do-it-yourself tutorial.

In the short clip, the rich female celebrity gave a step-by-step procedure for her daily routine resulting in her flawless skin.