The past few days spent in Qatar have indeed been interesting for Nigerian singer, Davido, and his 30BG crew members.

Just recently, a new video from their World Cup ceremony attendance surfaced in the online community to the delight of netizens.

Apparently, Davido’s official lawyer, Bobo Ajudua, ran into billionaire and Twitter boss, Elon Musk, and he didn’t hesitate to approach him for a quick chat. 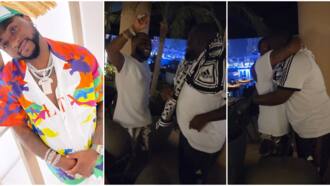 “That long hug”: Davido dances like a happy kid as he sees Soso Soberekon in Qatar, they embrace for minutes

Ajudua was spotted side by side with the business mogul who was also present at the stadium to enjoy the World Cup final.

Watch the video as seen online below:

“Davido lawyer trying to close-in on the richest man…if you know what that means.”

“His lawyer was hello Mr Elon can my artist take a picture with you sir .”

“Smart guy which opportunity you want again in life.?”

“Omo na normal Davido cooking him the cook not new.”

“All of una just dey cap if e easy travel comot for naija first talk more of snapping with the one of the richest in the world bad belle people everywhere.” 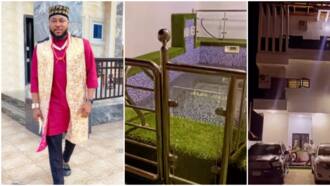 In a different story about the 30BG musician, Legit.ng previously reported that singer Davido and music executive Soso Soberekon got social media users feeling emotional after they were seen in a video.

The two had just seen each other in Qatar and they didn’t hesitate in sharing a long and tight brotherly hug.

“That’s love right there. A genuine exchange of encouragement between men,” one social media user who reacted to the video wrote in the comment section.