FCT, Abuja – The Central Bank of Nigeria (CBN) has said the bank’s governor, Godwin Emefiele, would not be appearing before the house of representatives on Thursday, December 22 as expected.

According to The Punch, the apex bank stated that Emefiele would be represented by the deputy governor on financial system stability, Aisha Ahmad. 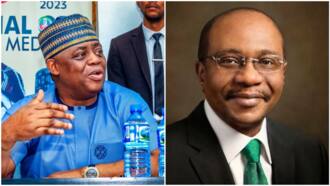 Edward Adamu, the deputy governor of the CBN on Corporate Service, disclosed in a letter to the house that the CBN governor is feeling ill and would not be appearing before the lawmaker for the second time on Thursday.

Following protest and condemnation, the green chamber rescheduled the appearance of Emefiele for Thursday as lawmakers insisted that the cash withdrawal limits that the apex bank had set must be suspended.

The CBN governor was then summoned to give an explanation about the new policy of the bank which had set limits to the withdrawal of cash at the Deposit Money Banks and other financial institutions. The speaker of the house, Femi Gbajabiamila, read out the letter from the CBN to members of the house during plenary on Wednesday, December 21 and the lawmakers accepted that Emefiele should be represented.

Legit.ng earlier reported that Kola Ologbondiya, the spokesperson of the PDP presidential campaign organisation, has alleged that Bola Tinubu of the APC, is behind the travails of Godwin Emefiele, the CBN governor.

In a veiled message, Ologbondiyal alleged that politicians with bullion vans and stocked cash are the ones behind the dilemma of the CBN governor.

Some Nigerians have been mounting pressure on the EFCC to investigate Bola Tinubu following viral pictures of bullion vans allegedly conveying money to his residence on the eve of the 2019 election.