Popular Nollywood actress, Iyabo Ojo’s 45th birthday party was a talk of the town event after photos and videos from it flooded the social media space.

The movie star turned a new age on December 21, 2022, and she unveiled her new lover, Paul Okoye aka PaulO, to the joy of fans. 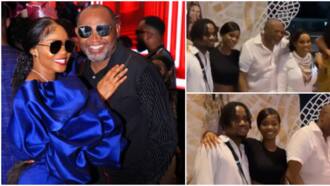 Iyabo Ojo at 45: Beautiful moment actress and her lover Paulo posed with their 4 kids for family photos

A party was thrown to celebrate her birthday later in the evening and it saw a number of top Nigerian celebrities in attendance.

Stars such as Nkechi Blessing, Soso Soberekon, Funke Akindele, Mercy Aigbe and Adekaz were in attendance.

In snaps making the rounds, Iyabo Ojo and her man, PaulO, were seen rocking matching white outfits while they danced together all night.

In another snap, actress Nkechi Blessing, made it rain cash on the celebrant as she danced. Funke Akindele was also seen stepping it up on the dance floor before she proceeded to greet other celebs at the venue.

See the clip below:

The celebrant also had a lovely talking drum shaped cake at her birthday party as the guests spelled out Jesus as she cut it. Iyabo Ojo was all smiles as she partied with her people. 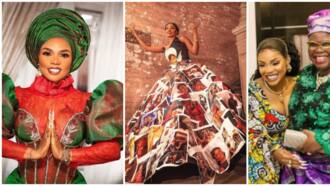 See photos of Mercy Aigbe, Adekaz and Funke Akindele at the star-studded event below:

A number of netizens gushed over the beautiful display of love between Iyabo Ojo and PaulO, others reacted to the other celebs at the event. Read some of their comments below:

“I don’t know why I’m happy for her . The fact that she found herself a good man not the snatching from another woman .”

“I am so happy for iyabo, every woman deserves to be loved and pampered.”

“May this joy last.”

“Even high school new love sef no hold each other this tight with cute chemistry to dance.” “Susu be serving legs for days”: Adesua and Banky W give cute couple goals in style

“Yah Allah please protect them from every evil eyes. This joy and happiness right here shall be permanent Bi’idhnillah ”

“May the heavens preserve this SHIP . No principalities or powers in human form or bad belle would even come near them. The ship has sailed and would reach the destination. Amen .”

Iyabo Ojo and her lover, Paulo, are currently trending in the online community after they both went public about their relationship on the film star’s 45th birthday.

The top music executive was fully present at a birthday party organized to celebrate the actress and he made sure to show up with his children.

A video making the rounds online captured the moment Paulo, Iyabo and their four children came together to take family photos.