A recent video of an Oyinbo man that was made to cry by the way his birthday was celebrated by his Nigerian friends while on location to shoot a movie has gone viral online.

The Oyinbo actor, who took to his social media page to share videos of himself on the day the incident happened, noted that he almost cried. In the viral clip he shared, the Oyinbo man looked scared as the set director came at him ferociously, ordering him to leave his set.

The director could also be heard accusing the Oyinbo man of doing something that he had done a day before and was repeating it.

However, when it seemed like things were about to escalate with the white man getting teary, other people gathered and started singing birthday songs for the Oyinbo man.

Watch the tragic-sweet viral moment of the Oyinbo actor crying below as his colleagues prank him:

“The man body just weak, say na which kind wahala be dis self?” 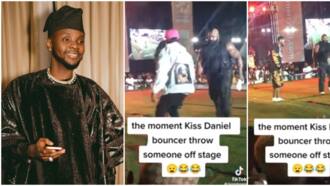 “What if he got killed?” Moment Kizz Daniel’s hefty bouncer caught man dribbling him, throws him off stage

“All this one na oyibo? All this Lebanese and Indian Una dey call oyibo?”

“Why the unnecessary tension?? Y’all know these white people re very emotional.. what if he collapsed during this rubbish??”

“E pain me ….innocent man, our own surprise is always aggressive, I never see.”

“I cried I hate bully! This prank is too expensive.” “Warri really showed me love”: Fans react to video of Portable flaunting N100 and N50 notes sprayed on him

The video was reportedly posted on Fiona’s TikTok account weeks before the news of Ryan proposing and engaging DJ Cuppy in Dubai went viral.

The emergence of the video has sparked many questions, as some have queried if Fiona was Ryan Taylor’s ex or his side-chic.