More drama continues to unfold between Nollywood actress Empress Njamah and her estranged lover following a recent revelation she made on social media.

Legit.ng earlier reported that Njamah in a lengthy video cried out for help and revealed that she is being blackmailed by a man who came into her life under the guise of being a lover.

Njamah also disclosed that an engagement video which was uploaded on her page was filmed under duress and posted by the man who has access to all her social media accounts. 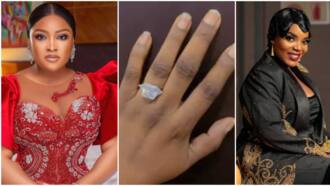 Well, in a response video making the rounds online, the man came out to reveal his identity and issue more threats against the movie star.

“I swear to God you don’t know what is coming. Everything that I said to you, you think it’s a joke, but trust me it’s not a joke. I know your day-to-day activities and I know everything you do on a daily basis,” he said.

Watch him speak below:

“This guy should be arrested.”

“Chaiii. All in a bid to find love…. Oga you will be caught arrested and you will sure rot in jail. Shey you don run commot from Nigeria. God go fight for empress.” 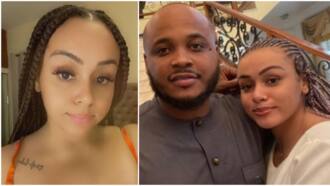 “I’m a German citizen”: Sina Rambo’s wife Heidi claims she’s been getting death threats after calling him out

“Are you God ? Do your worst …. We are strongly behind her.”

“Iru eleyi ……if u dont understand yoruba ,it means God help us.”

“Wetin you go do her? See this Guy oh. With his Face Like my Masquerade for Oguta. I no Blame you, if not Depression. Wetin someone like Empress look for your Ugly Body? See your Mouth like my Canoe for Okrika River. How do you Kiss ?”

Elendu in a statement issued on her Instagram page disclosed that the actress was being blackmailed and as such people should discard the news.

Social media users who had earlier congratulated the movie star had different things to say about the matter.