A viral clip of Nollywood newcomer Lolade Okusanya crying profusely during the premiere of Toyin Abraham’s movie Ijakumo has got people talking online.

The young actress in the viral clip was heard thanking Toyin Abraham for giving her an opportunity of a lifetime by starring in a lead role in her movie Ijakumo.

Pearl Crownfits, fondly referred to within the skit makers world, said that as much as she’s trying to be a celebrity, she can’t help but let out her emotions and express them to Toyin Abraham. 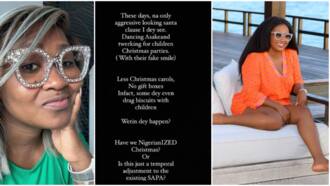 Ace fashion designer Toyin Lawani was also on the scene of the incident as she tried to calm Lolade’s emotions.

At some point, Lolade’s emotions boiled over. She just started to call Toyin Abraham’ mummy’ while noting that she can’t believe she is now someone people are walking up to asking to take pictures with.

Watch the moment Lolade Okusanya got emotional as she calls Toyin Abraham mummy:

“Thank God for women who are becoming great in the industry and pulling up other women, reducing the chances of opportunists and exploiters. God bless these great women who want to see the younger generation grow❣ You are QUEENS.” 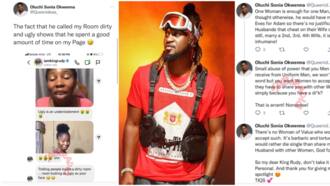 “Paul Okoye slid into my dm to insult me”: Lady wails online after Rude Boy took time to troll her, fans react

“If only u know the amount of times she’s been turn down u will understand this video.”

“This is the definition of gratitude. Not those ones that will say “thanks.”

“Omo I shed tears …. congratulations lolade..I knew you through toyin too.”

“I was just praying make the Bobby no Comot cloth ooo… but it’s emotional.”

“Sweeet it’s amazing to eee when people are expressive with their appreciation. Esp publicly. God bless her.”

“Everybody don turn mummy and daddy for the industry. But I love her sha. She appreciated her for uplifting her. I love that attitude. When u help some people. Dem go still deny the help you render them.”

Young Nollywood actor Stan Nze was at the recent movie premiere of the movie Ijakumo, which Toyin Abraham produced, and he had a few great words to say about the actress extraordinaire. 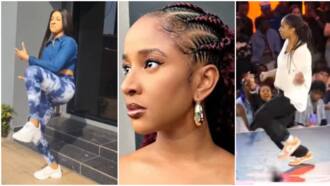 Adesua Etomi confirms she is a dancer, mesmerizes many with moves as lookalike dance video trends

“Toyin Abraham is such an amazing filmmaker, she puts her soul body and mind into everything she does. I look forward to seeing great acting from Kunle Remi and Lolade Okusanya.”

Meanwhile, Legit.ng earlier reported that Nollywood actress Toyin Abraham finally had the premiere for her widely-anticipated movie, Ijakumo, on Sunday, December 18, and it was nothing short of a successful event.

Colleagues in the entertainment industry showed up in their numbers to support the actress, who has spent the past few months working on the project.

The theme of the night was ‘Sunday best’, and guests showed up in stylish ensembles that could have been otherwise worn to a church service.