Popular Nollywood actress, Toyin Abraham and BBNaija Level Up winner, Phyna, recently gave fans something to talk about with their recent display of love on social media.

Just recently, the film star held the premiere of her new movie, Ijakumo, and Phyna was one of the celebrity guests in attendance.

The BBNaija star later took to her page to share snaps of her outfit at the event.

In Phyna’s caption, she gushed over Toyin’s movie and noted that it was one for the books. The reality show star wrote: 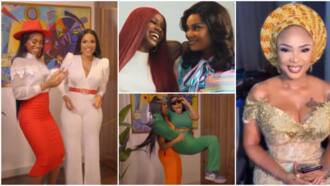 “What else best defines a Gold Star

#ijakumo the movie by @toyin_abraham was a movie for the books”

Toyin Abraham assures Phyna she is coming for her

The Nollywood actress seemed very moved by Phyna’s gesture and she reacted in her comment section.

Toyin Abraham professed her love for the BBNaija star and added that she was coming for her soon.

See screenshot of their exchange below:

A number of netizens were pleased to see their faves get along well with each other and they reacted. Read some of their comments below: “Exactly how I imagine it Na the likes of toyin, funke, mercy j, chioma and co Cos na them fit handle phyna .”

Toyin Abraham talks about the turning point in her career

Veteran Nollywood actor and movie producer Toyin Abraham took her fans on a trip with a deep insight into her remarkable career as an entertainer.

Toyin Abraham also talked about going through a significant transformation in her career from being just a Yoruba actress to a cross-dimensional Nollywood star and her last marriage’s role in it.

She also shared that she has a unique working relationship with Kunle Remi. The producer revealed that when she worked with the Anikulapo star on the set of ‘The Prophetess’, she discovered that the Saro actor is a fantastic script interpreter.