Damien Agyemang, son of star actress, Jackie Appiah, seems not to be a big fan of social media and loves to keep his life very private.

On the rare occasions when Damien shares photos on his Instagram page, he barely shows his face.

His head usually faces the ground or is tilted towards an angle where it is hard to make out his face. Many peeps have longed to get a proper glimpse of the son of the millionaire actress’ face. 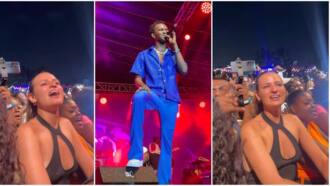 Finally, Damien decided to give fans what they had longed for and dropped a selfie showing his bare face. He called the selfie “gbonyo selfie”, which stands for a photo where one does not smile and keeps a straight face.

Damien looked handsome and baby-faced but still looked all grown up thanks to the large chunk of sideburns that had grown all over his plump cheeks.

Damien had a sharp, faded hairstyle which complemented the peach fuzz on his chin and cheeks. The handsome young man gained the admiration of his followers, who admired the photo and showed him love.

First full face with no blur effect or face down 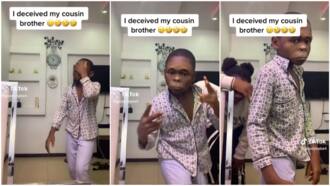 “He is angry”: Sister plays brother, he looks at camera with TikTok’s filter, his face changes to monkey’s

In other stories, Jackie Appiah’s son Damien is living the life and has given folks a glimpse of his luxurious lifestyle.

He flaunted his mum’s luxurious mansion and an expensive Maserati in some photos spotted by Legit.ng.

Damien is the only son of Jackie, and he is living the life of a rich kid, as depicted in the interesting pictures.