Popular Nollywood actor Nosa Rex has given social media users something to talk about after taking to Instagram with a video showing one of his major achievements in 2022.

The actor uploaded a rare video showing how he spends his free weekends in his mansion which was acquired a few months ago.

A portion of the video captured the building in its full glare alongside some expensive automobiles parked in front of it. 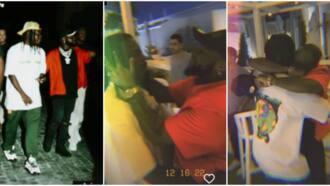 The actor was also spotted picking out a bottle of drink from his car before heading to a different part of the compound where his customized swimming pool area is located.

Rex sat by the pool and treated himself to a nice cup of drink. Sharing the video, he wrote:

“Congratulations superstar You deserve to be pampered You’ve worked for it.”

“❤️ The chill after the hustle.”

“God is great. Na only time e go take . As long as you keep grinding.” “Go and make us proud”: Man storms son’s graduation event with brand new SUV, gives it to him in viral video

Meanwhile, Legit.ng previously reported that singer Kizz Daniel was hailed by fans and colleagues on social media after sharing news of an investment made for his wife and kids.

The Buga hitmaker splashed millions on a beachfront property for his family and shared the news on Instagram.

Many flooded the comment section with congratulatory messages for the music star and his family members.