Popular singer Kizz Daniel is currently making headlines over his good deeds as he gifted a male fan one million naira at his concert which took place on Saturday, December 17th.

A viral video showed the moment Kizz Daniel during his performance on stage gave the male fan an opportunity to display his talent.

The fan stunned the Cough crooner and the audience with a stellar performance of Kizz Daniel ‘True’ featuring Mayorkun. 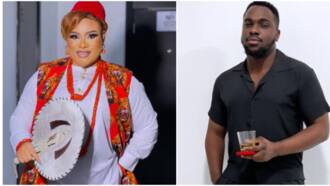 “She go reach everybody enjoy your turn”: Nkechi Blessing’s new lover posts her photo as he proudly claims her

Kizz Daniel right on stage said he would give the fan N1million,

A clip showed the emotional moment the broke down in tears on stage.

“That bouncer need to be calming down …..”

“Awwwww any small thing I go just dey cry shey nah only me?”

“I sabi sing all kiz daniel na how i want take see am sing am for am be d problem.”

“Wow God Bless Him He is also kind like davido❤️❤️❤️❤️.” “The guy even perform pass who get song.”

“I am overwhelmed ,see me Rollin as if na me God o grace.”

Legit.ng reported how Kizz Daniel penned a message to Davido, who continues to mourn his son Ifeanyi, who passed away in November.

Since Ifeany’s demise, Davido remained offline and has stayed away from shows he was billed to perform.

Kizz Daniel in a post expressed regret that the DMW singer wouldn’t be performing alongside him on stage at his Abuja concert on Sunday, December 11.