BBNaija Level Up winner, Phyna, is no doubt having a good time interacting with her fans on social media.

Just recently, the reality show winner’s fans decided to make it a trend to replicate popular photos of their faves with drawings.

A series of drawings of Phyna alongside the photos they were made after, trended on social media and netizens had a field day with it.

See some of the drawings below: 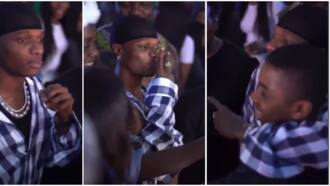 Some fans made sure to exaggerate Phyna’s features in their stories and it all made for a comical display online that had the reality star reacting.

Taking to her Twitter page, the BBNaija winner revealed that the drawings had made her laugh so hard.

“I see all the drawings my jaw is healing from laughter.”

Nigerians react as Phyna’s fans draw funny images of her

Read what some social media users had to say about the amusing display from Phyna’s fans below:

“Love that we are a family and not fans anymore. We know how to have fun with our babe.”

“If na another fanbase draw Phyna like this Omo Phynanation go craze for them and their fav I know my people very well but u see this cruise of a thing leave am for phynation na we get am.” “Den even try I nor fit hold pencil.”

Popular Nollywood actress Toyin Abraham and BBNaija Level Up winner, Phyna, gave fans something to talk about with their recent display of love on social media.

Just recently, the film star held the premiere of her new movie, Ijakumo, and Phyna was one of the celebrity guests in attendance.

The Nollywood actress seemed very moved by Phyna’s gesture and she reacted in her comment section.