Rafael Nadal stands alone on 22 Major titles following a great run in 2022. The Spaniard will try to break more Major records in the current season, including one he shares with Roger Federer. Nadal and Federer are the only players with 15 semi-finals at a single Major.

If he reaches another semi-final in Paris in June, Rafa will top the charts and stand alone on 16. Nadal made his Roland Garros debut in 2005. A teenager was among the favorites after winning Monte Carlo, Barcelona and Rome. He proved that on the court by lifting the first Major crown and becoming the last teenager to achieve that before Carlos Alcaraz.

Rafa has been a player to beat in Paris for almost two decades, conquering 14 titles in the previous 18 trips to the French capital. Rafa has won 112 out of 115 encounters at Roland Garros, dominating like no one before him at a single Major.

Nadal reached his 15th Roland Garros semi-final after 18 appearances at his beloved Major last year. Struggling with a foot injury, Rafa was unsure about his chances, traveling to Paris with his doctor and hoping for the best.

The Spaniard made a winning start, beating Jordan Thompson 6-2, 6-2, 6-2 in two hours and two minutes. Rafa faced Corentin Moutet in the second round and scored a 6-3, 6-1, 6-4 triumph in two hours and nine minutes during the night session on Court Philippe-Chatrier.

The Spaniard experienced two breaks and responded with seven return games on his tally to control the scoreboard and advance without spending too much time on the court. In another similar clash, Rafa toppled Botic Van De Zandschulp 6-3, 6-2, 6-4 in two hours and 11 minutes for a place in the last 16.

Nadal lost serve twice and grabbed six breaks to seal the deal despite a little scare in the third set’s closing stages. Rafa set the fourth-round encounter against Felix Auger-Aliassime, his first serious opponent in Paris.

Rafael Nadal and Roger Federer have 15 semi-finals at a single Major.

Thus, Nadal remained undefeated in the clay-court five-setters and set a blockbuster clash against Novak Djokovic.

Rafa could have defeated Felix earlier had he converted more break chances, creating 22 and seizing only six. The Canadian earned five breaks to remain competitive and became the fourth player who kept Nadal on the court at Roland Garros for over four hours.

Felix joined Robin Soderling, John Isner and Novak Djokovic on the list of players who took two sets away from Rafa in Paris. Still, despite a great effort, he could not play his best tennis in the decider and hit the exit door.

In their 59th encounter, Rafa beat Novak 6-2, 4-6, 6-2, 7-6 in four hours and 12 minutes to dethrone the Serb and avenge the last year’s defeat. Nadal kept the second serve safe and defended eight out of 12 break chances.

The Spaniard claimed 43% of the return points and turned them into seven breaks from 17 opportunities. Rafa fired 57 winners and 43 unforced errors, determined to control the pace with his forehand and make the first move in the exchanges.

Novak had a massive chance to force a decider and prolong his chances, opening a 5-2 lead in the fourth set and creating two set points on his serve in game nine. Nadal stayed calm and saved them to extend the set. He gathered a boost and moved over the top with a backhand down the line winner at 6-4 in the tie break. 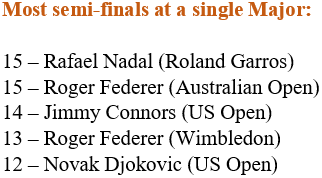