Sharing the picture along with another showing his current looks, the gentleman revealed that he was a laborer hustling to make ends meet only four years ago.

The 2018 photo saw him looking all dirty in an uncompleted building which is a sharp contrast with his present life where he often dresses up neatly in a suit and tie. 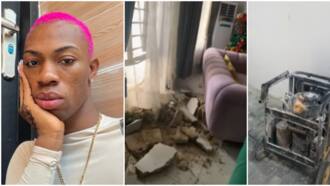 “I’m sad because of the loss”: James Brown’s car crashes into his living room, generator set goes up in flames

“We only have few days before this year ends so let me do this. Here’s a picture of me as a labourer in 2018 and a picture of me in my friend’s room in 2022 smiling,” he captioned the photo.

How Sika’s fans reacted to his old photo

Put water mark for the second pic before some bro go steal am.

Labouring doesn’t end. Things get better. God bless the many years ahead of you.

Student who asked for help to pay for flight to study in the US gets it, set to travel Father of son who is studying abroad tells him never to return in video, gives him strict warning

In another inspirational story, Smart Godwin, a Nigerian who got a fully-funded scholarship from the North Carolina Central University, Durham, USA got the opportunity to proceed with his studies.

Smart had initially lacked the money to pay for his flight ticket and accommodation after bagging the scholarship offer.

He said in the tweet in which he asked for help:

“I have spent almost all my savings on application documents,fees and standardized test and I am left with #300k which is not enough to book Flight ticket travel materials or sort my accommodation expenses.”