Nigerian singer Tems isn’t one to show off on social media but she knows how to get the internet talking when she wants to.

Just recently, a video of Tems hopping on a private jet that had been customized with her name surfaced in the online community.

From indications, the Free Mind hitmaker was heading out to Abuja with her crew members for a Detty December show she had been booked for 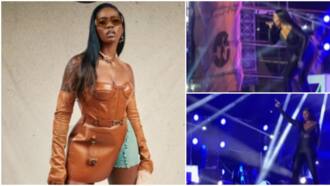 Apart from the grand private jet, Tems also flaunted her curvy stature in the video as she made her way to the aircraft.

A customized red carpet was also rolled out to welcome the Golden Globe nominated musician.

Watch the clip as sighted online below:

“God dey create abeg. Anyways, Compliments of the season everybody .”

“Just when yem Tiwa savage and egi Yemi alade still dragging the queenship rank for the female industry and boom… Her lordship woman king Tems surface to silent em all and put every1 em in their place and guess what, it’s a case close for em. No objection.” 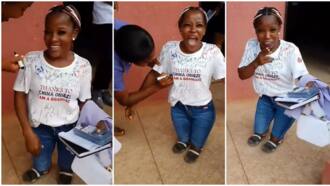 Meanwhile, Legit.ng reported that Tems gave her fans and supporters yet another reason to brag about her.

The much-loved songstress made history as became the first Nigerian singer to bag a Golden Globe nomination.

Tems was nominated alongside Rihanna for her songwriting efforts on Marvel’s Lift Me Up movie soundtrack.