From eye-popping openings to jaw-dropping corset styles, the year 2022 was certainly a memorable one regarding the wedding fashion scene. The trend of brides opting for anything but the norm has risen greatly into prominence in the last couple of years.

This stands in stark contrast to the popular choices back in the early 2000s.

According to Almanac, the white wedding dress originated with Anne of Brittany on the occasion of her marriage to Louis XII of France in 1499.

But it wasn’t until 1840, when Queen Victoria married Prince Albert, that the white dress was made popular. 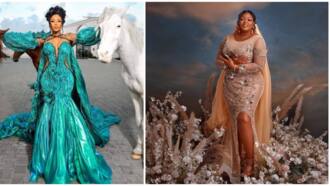 Ifu Ennada, 5 others make it to list of most memorable celebrity outfits of the year

Queen Victoria chose to forgo the royal tradition of wearing coronation robes when she married Prince Albert on Feb. 10, 1840. Instead, she wore a fashionable white gown that was featured in newspapers and magazines around the world.

The style and colour of the dress was copied by many women across the world as the atrove to look young and attractive like the queen.

White wedding gowns were considered a symbol of wealth as only the brides were wed in clean, elegant places that were removed from the muck and grime of life during the mid-19th century Industrial Age.

Today’s era of brides are daring and unconventional

In today’s society, not only is white no longer the main colour, there are brides opting for bolder and daring colours – like black.

A while ago, a bride went viral on social media fro rocking a black wedding dress. 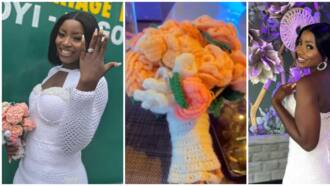 “She wanted something unique and classy”: Designer behind bride’s crochet dress speaks

The videos which appear to have been taken down sparked mixed reactions from social media users.

While some apllauded her for her bold fashion choice, others voted down the look.

Moving from colours, there are brides who are not afraid to show skin. While the conventional styles for bride is modest choices, fashionista brides are setting the aisle on fire as a model would do a runway.

In October, a bride left internet users stunned when she sported a 2-in-1 wedding gown which transformed into a jumpsuit for her reception.

Only recently, daughter of Dunamis pastor Paul Enenche, Deborah, was spotted rocking a pair of knee-high silver boots for her wedding reception.

Bridal fashion designer, @official7thavenue, has dressed numerous brides and some cebrities as well.

The brand is behind BBNaija star, Doyin’s look at Beauty’s birthday bash. Year in review: Rita Dominic, 7 other top wedding looks of 2022 that were memorable

Speaking in a chat with Legit.ng’s Kumashe Yaakugh, the creator director maintains that most brides who come to her brand, want the conventional look.

“They want the white fairytale princess look. The only exceptions I get are from my Muslim brides that make their dresses in other colours. I guess that’s because their religion may not be really particular about white and its significance.”

On why she thinks the trend has become popular, she says:

“I think there’ll be a rise in coloured bridal looks in the years to come because more women want to be different, and they don’t want to conform to “society’s standards”. They want to wear what they love and stand out on their big day.”

Speaking with a crochet designer, @crochetbystacia, it was the same reason a bride gave when she rocked a gorgeous knee-length crochet dress with a detachable bolero. A year in review: 8 biggest fashion fails that went viral in 2022

What to expect from brides in the coming year

If there is anything constant about fashion trends, it is how they constantly evovle.

This can be seen in the major shift from conventional styles to bolder and unique sense of style among brides.

While off-white colours like cream, ivory and silver have gradually replaced white dresses, more daring colours will become the order of the day.

Bride dazzles in stunning 2-in-1 design, switches from ballgown to palazzo pants

Brides of this era are not taking it easy when it comes to wedding fashion, and we love it!

The trend of people rocking transformative pieces continues to dominate the fashion scene and it is not hard to see why.

Fashion designer, Dauda ‘Deebest’ Damilola, posted a video of her latest bridal design. The video sees a beautiful bride in a puffy-sleeved ball gown which later transforms into a palazzo look.