Late Nigerian gospel musician, Sammie Okposo, may be gone but his memories remain alive to friends, family members and colleagues in the entertainment industry.

Just recently, a praise party was held to honour the veteran musician who left the world on Friday, November 25.

A video from the praise service surfaced on social media and captured guests who came out to celebrate the life of the deceased gospel singer.

Colleagues like Charles Inojie, Desmond Elliot, AY Comedian, Ali Baba and Chinedu Ikedieze among others were all out for the Wellu Wellu hitmaker. 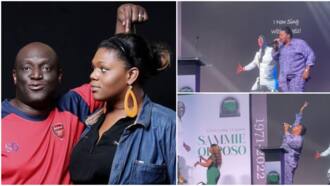 “She is just like him”: Many react to video of Sammie Okposo’s daughter performing at his farewell service

Music star Timi Dakolo and comedian Akpororo were also among those who attended the late Okposo’s praise service.

Colleague Tope Alabi also came to pay her respects to the late Okposo. Watch her take the stage below:

“Those who couldn’t help him when he needed them most..but see them here gallivanting around in the name that they are celebrating his death.”

“Sammie is living is best life at the other side trying to pass a message to the world which is true love is the key to earthly live standard that’s all.”

“Hmmm Allahu Akbar… he takes who he wishes to irrespective of age, colour, tribe, status, gender or even religion kabiesi.” “Sony wanted to take out your verse, but I said no”: Zamosings on how Davido helped him, says he’s not human

“Why people dey always remember people when they died ? This is cruel world self.”

“I’m glad he made peace with his wife and maker before he died. May his soul rest in peace.”

The deceased movie star’s obituary surfaced in the online community to the shock and surprise of his fans.

Many sent their condolence messages to Norman’s family and prayed for him to rest in peace.