Controversial Afrostreet musician, Portable is at it again with his infamous antics online. Earlier today, Monday, December 19, 2022, the singer shared a video on his page that sparked emotions and reactions.

In a viral clip shared on Instagram, Portable was seen bragging as he flaunted the money sprayed on him at a show he performed at in Warri recently. 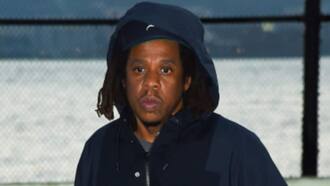 Jay-Z calls out fan for bringing fake vinyl for him to sign, netizens criticise the American rapper for being insensitive

The musician in the clip posted on his page was hugely appreciative of his fans, lovers and supporters who came out and sprayed their hard-earned money on him.

Portable also had nice words to say about Warri and its people as he notes that he was treated very well and showed him steadfast love that he doesn’t know how to repay.

See the video of Portable flaunting N100 and N50 notes sprayed on him at a show in Warri:

“I like u because u sabi appreciate… u go still carry the money dey throw for street u be man.”

“One thing I have realized about this guy is that, no matter the denomination, he still appreciates it and post it. That is a form of gratitude…” “Most cashout artist of the year.”

“One of the reason I like you Every single cent counts.otunbacashout.”

“Realeast… Man doesn’t care if the money is dollar or not, doesn’t care whatever denomination it is. Zaazu no fit go broke again. He gives and doesn’t fake it. Kinimah winning.”

Meanwhile, Legit.ng recalls reporting that popular, outspoken singer Habeeb Okikiola better known as Portable, has yet again got people talking online as he takes to social media to call out a Nigerien man who sprayed wads of fake money on him at a club.

In a video shared on his page, the singer could be seen tearing the fake naira notes while he cursed the man who sprayed them on him at a club.

Portable also went further to slam his fans in Port Harcourt for allowing such a thing to happen to him despite how much love showed them during his short stay in the city.