It appears Nigerian billionaire daughter Ifeoluwa Otedola better known as DJ Cuppy and Oyinbo lover Ryan Taylor seems to be getting ready to walk to the altar soon.

This comes as Taylor shared pictures of him and Cuppy, who he referred to as his wife-to-be as they go on a date night.

Sharing the picture on his Twitter handle, Ryan Taylor wrote:

“Straight out the gym. To date night with my wife to be @cuppymusic.” 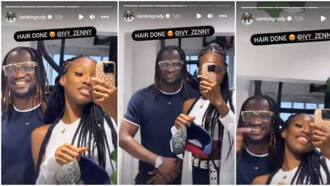 He also shared the same picture on his Instagram page with a caption that read:

Legit.ng captured some of the reactions see them below:

“We(Nigerians) are giving you one of the most humble, and controversy free celebrity we have, you dare not break her heart.”

“Just day play we day observe your next move.”

“@cuppymusic, Boxer! Ha, wo, shey him know say you be our priceless? Shebi he read the terms and conditions? Nigerians will skin him if we hear pim. Love, lights and laughter to you both. May the babies be beautiful and handsome. Happily ever after…Amin!” 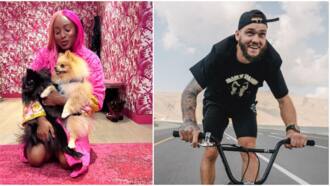 Cuppy shares new pics as she finally returns to her ‘babies’ in London, fans say they now have a father

Nigerian billionaire Femi Otedola and his family now have two weddings to plan.

Aside from Temi Otedola and singer Mr Eazi who went viral earlier this year with their relationship, Cuppy and her oyinbo lover Ryan Taylor also went viral online over their proposal video.

Cuppy and Ryan, who are lovebirds, have shared some lovely moments of themselves in the United Arab Emirates (UAE) as they call themselves soulmates.