Tiwa Savage’s son Jamil aka Jamjam warmed the hearts of many in an adorable video with his mum.

The singer was on a live video, and while she asked her fans if she should make new music, her son suddenly advised her fans to break her heart.

Tiwa took some minutes to explain to Jamil why it’s bad to break people’s hearts and he eventually made her realise he was joking.

The singer then moved on to announce that she had been killing her music features, and Jam Jam shouted, noting that killing isn’t a good job like his mum explained. 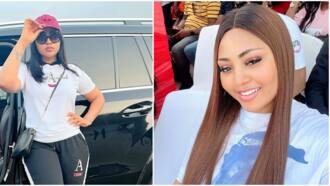 Tiwa then opted to use the word slaying, but her son still scolded her and added that she would turn into a bad guy if she slays or kills.

Nigerians react to video of Tiwa Savage and her son

“This baby he’s too adorable❤️ and Tiwa Savage my God! She’s too beautiful.”

” no school fees fashioned against you shall prosper.”

“Mummy no kill ooooo no slaying too.”

“Some slangs are not for kids to hear…Good thing she was quick to correct.”

“next time lock ya sef inside ur room and do ya videos these kids no go kill person.”

“His teachers really doing a good job please try and use good words around your wards, children de quick learn.” “Mummy just say I’ve been doing a great job with my features make he rest.”

“When the school fees you paid is working against you.”

A Lagos socialite couple, Monsuru Olalekan Rufai and Monsurat Mosunmola Rufai, celebrated a 10-year milestone of their marriage in a very special way.

A huge party was thrown to mark their decade anniversary as a married couple and videos from the event made the rounds on social media.

A number of top socialites were in attendance as well as the award-winning music star, Tiwa Savage, who performed for the guests.