The young social media influencer had built a duplex and celebrated the achievement with a huge party.

One of the highlights from the star-studded event was Papaya’s housewarming cake which was an exact replica of her new duplex.

In a video posted on Tiktok by @Pamelasmith30, the socialite was seen using a sword to cut her cake as her friends hailed her. 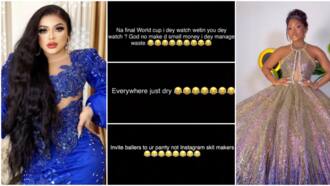 “Why are there empty chairs?” Bobrisky laughs at Papaya Ex’s housewarming party, compares it with his event

It is a usual practice for bakers to use cardboard and wood to amplify some parts of the cakes that they make but in Papaya’s case, it appeared all of it was edible.

As Papaya used a sword to poke holes on her cake, her friends were heard hailing her in the background with claims that it was ‘Zero Fugazi’ meaning it was all real.

The socialite continued to move around the cake to cut some parts of it and poke holes into it in her bid to show her fans and haters alike that it was all real.

The video of Papaya’s cake trended online and got people talking. Some of them praised her while others used the opportunity to taunt her rival, Bobrisky. 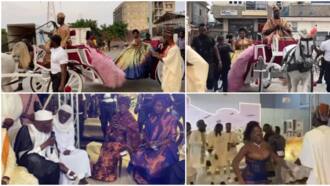 “He no easy ooo, if you think it easy try it ! Congratulations to her “

“Where senior man dey ? I won check something.”

“Anyone still hating at this point need Jesus.”

“Mennn I’m inspired I don’t know about you, I don’t care how the money comes but Girl is really winning ❤️❤️”

“Someone should check on Bobrisky o, he go don drink plenty cups of hot milk.”

Controversial Nigerian crossdresser, Bobrisky, is not backing down from his beef with social media influencer, Papaya Ex, and he recently trolled her over her housewarming party. On his Snapchat profile, the crossdresser resorted to throwing shade at Papaya’s event which he described as being very dry.

Bob laughed at Papaya on his page and noted that he was watching the World Cup finals and not her event.

In a subsequent post, the crossdresser also trolled Papaya’s party guests and noted that she should have invited ballers and not skit makers.