Zlatan took to his Instagram page to share pictures of himself and his son, Shiloh while appreciating God for adding a new year to his age. 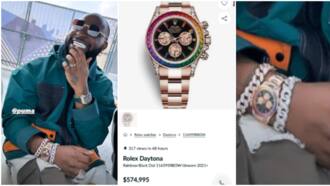 Like other Nigerian celebrities, Blaqbonez took to Zlatan’s comment section, with a lengthy message on how they have come a long way. The rapper added that he was happy all their struggles paid off.

“Bro we came a long way from that studio in Alapere, recording inside heat, jumping from one rap competition to the other, driving the Picanto u got from one of the rap competitions hahaha, but we never stopped and it paid off. Happy Birthday, g .”

“@blaqbonez we no ask you story.”

“@blaqbonez I know say you they online but to reply they hard!! Shea na because my account no dy verified .”

“@blaqbonez must you tell story before you wish… @blaqbonez.”

“@blaqbonez who asked you bro.” “@blaqbonez you guys stand strong thank God you made it.”

Zlatan Ibile in a video that went viral spoke about the goodness and greatness of veteran music star and YBNL boss Olamide.

The singer listed himself alongside the likes of Adekunle Gold, Pheelz, Young John, Fireboy DML, and Asake as those who have been beneficiaries of Olamide’s goodness.

Zlatan also recounted how Olamide reached out to him via phone, adding that the YBNL boss took him to another state to record his first song.